Skip to content
HomeTours Mount Rushmore and the Badlands

If you would like to be on the waiting list for this tour, please give us a call or email us at [email protected]

The Black Hills of South Dakota are home to many truly monumental places.  From the four president’s faces carved high on Mount Rushmore, the Cathedral Spires of Custer State Park, to the rugged Badlands in the east and Devils Tower in the west you will be amazed at the pure beauty found here.  Covering more than five million acres of forest and mountain lands, an oasis in a sea of prairie, in the Black Hills you’ll also find rich western history, abundant natural beauty and meaningful adventure. Welcome to South Dakota where your tour starts in Rapid City,  the gateway to the Black Hills and known as The City of Presidents.   A series of life-sized bronze statues of our nation’s past presidents greet guests in the downtown area.  These statues are a tribute to America’s heritage and a historic reminder of the legacy our nation’s presidents have created.  This week our accommodations will be at the historic Hotel Alex Johnson.  Built in 1927 by a railroad tycoon, it has hosted six U.S. Presidents,  but it is most famous for being the on-location home for Alfred Hitchcock and Cary Grant during the filming of the classic movie North by Northwest. Marvel at the handcrafted décor and Germanic Tudor inspired architecture, while enjoying modern comfort and luxury with all the amenities and services provided.  Head up to the Vertex Sky Bar on the roof where breathtaking panoramic views of the city await.  Tonight we will get to know our fellow travelers at our welcome dinner reception.  (Dinner)

This morning we are off to the Badlands National Park.  Its striking landscapes span layered rock formations, steep canyons and towering spires.  Wildlife abounds in the park’s 244,000 acres and can often be seen while driving the Badlands Loop Scenic Byway.  Get your camera’s ready for when we stop at some of the best overlooks along the way.   We’ll leave the park and head to Wall Drug, America’s grandest roadside attraction, where free ice water and 5 cent coffee is still available!  Following lunch on our own, we are off to the Minutemen Missile Silos.  The Cold War was a defining historical event during the last half of the 20th century.  It led to fear, panic and distrust symbolized by a nuclear arms race between the United States and the Soviet Union.  A vast arsenal of nuclear missiles were placed in the Great Plains and hidden in plain sight for 30 years.  The Minuteman Missile remains an iconic weapon in the American nuclear arsenal.  Dinner this evening will be at The Firehouse Brewing Company,  one of Rapid City’s most unique landmarks.  Housed in the original 1915 Rapid City firehouse, it is no wonder that it’s listed on the National Historic Register.  The bar is embellished with authentic SD firefighting memorabilia from the days of the first fire brigades – including the original fire pole, ladders patches and more.  After dinner, feel free to walk back to our hotel which is right around the corner from “The Firehouse.”  (Breakfast & Dinner)

After our morning breakfast, we’ll start off with some shopping at the Riddles Gold and Diamond Factory Outlet.  Since it first opened in 1959, this family owned business has expanded to 65 stores in nine Midwest states.  Its headquarters, located in Rapid City, operates a thriving factory that produces its own jewelry designs and where the diamond cutters have created their own signature Noventa diamond.  Next, it’s off to “Chapel in the Hills.”  Since many of the original settlers of the Dakotas and surrounding states were Norwegian Lutherans, the chapel was built in the style of an original stave church (“stavkirke” in Norwegian).  Created by Dr. Harry R. Greagerson, it is a replica of the famous Borgund stavkirke of Laerdal, Norway.  Stop to see the Stabbur (gift shop), Museum of Scandinavian antiques, stroll the Prayer Walk and walk inside the chapel where you can sit on a bench and listen to a narration telling you the story of this unique chapel.  Our next stop is the Visitor Center at Custer State Park.   The center explores one iconic species of the prairie, the bison!  Sit back and enjoy the 20 minute movie in the 100-seat theater.  Then, we’re off to the lodge to begin our Jeep Tour of Needles highway! The Needles Highway which is located at the western edge of Custer State Park is a beautiful 14-mile drive through pine and spruce forests with stunning geological formations surrounding the route. This roadway dates back to 1922 when construction of the route was completed.   On the drive, we will pass stunning spires, drive through tunnels naturally carved in the mountains and stop at overlooks where we can admire the panoramic views of Custer State Park.  The granite spires are most definitely the most iconic features here and help give the name to this magnificent highway. From Needles our jeeps will take us through the park’s beautiful backroad to a mountain meadow canyon for a chuck wagon feast.  Along with some live entertainment which adds a western flair to the event, we will have a delicious chuck wagon dinner experience.  At the end of the evening, it is time to head back to the hotel for a good nights rest.

After a hearty breakfast, we’ll head into Wyoming to view Devils Tower. It is a massive geological formation that is considered sacred by the Northern Plains Indians.  This butte was the first U.S. national monument, established in 1906 by President Theodore Roosevelt.  Its hundreds of parallel cracks make it a favorite destination for climbers.  We will leave there and head to Deadwood, SD where we’ll walk in the footsteps of historic Old West legends like Wild Bill Hickok and Calamity Jane.  Gold was discovered here in 1874, which set off one of the greatest gold rushes in America.  The town’s roots date back to 1876 when outlaws, gamblers and gunslingers came to town looking for gold and a good time.  As you explore the town, enjoy lunch on your own in one of the bars and saloons where the food is served in an old west atmosphere.  Following lunch, we will journey through an authentic Lakota encampment at Kevin Costner’s Tatanka: Story of the Bison, which was created after he filmed the movie “Dances with Wolves.”   Next, we will enjoy a city tour of Deadwood to experience the rich history of this “Wild West” town.  Dinner tonight will be at the Deadwood Grill before returning to our hotel.    (Breakfast & Dinner)

We start our last full day with the Crazy Horse Memorial.  This is a mountain monument under construction which will depict a Lakota warrior, riding a horse and pointing to his tribal land.  The monument has been in progress since 1948 and is far from completion.  Take time to enjoy this monument in progress while learning about the Native Americans who once ruled this land. Next, we take a ride on the 1880 Narrow Gauge Train.  This narrated 20 mile round trip ride takes us through vistas of Harney Peak, mining encampments and the scenic hills following the original route of the Chicago Burlington and Quincy Railroad laid down in the late 1880’s.  We will disembark in Keystone, SD for 2 hours which will allow us time to shop and enjoy lunch on our own.  After our lunch break, we will board the train and head back to Hill City where we explore railroad history of the Black Hills at the South Dakota State Railroad Museum. Next, we will have the chance to sample a few wines, as well as, enjoy a delicious dinner at Prairie Berry Winery in Hill City.  Our final stop:  the lighting of Mount Rushmore National Memorial.  Gazing over the Black Hills, four U.S. presidents stand for hope, determination and the spirit of our nation.  Completed in 1941, Gutzon Borglum and 400 workers sculpted the colossal faces of George Washington, Thomas Jefferson, Theodore Roosevelt and Abraham Lincoln to represent the first 150 years of the great experiment in democracy that is America. We will be able to see the sun set on Mount Rushmore as they light this great monument. Following the lighting of the memorial, we will head back to the hotel for a good nights sleep. (Breakfast & Dinner)

Memories of majestic peaks and mighty presidents will be with us as we head off to the airport this morning for our departure home.  (Breakfast) 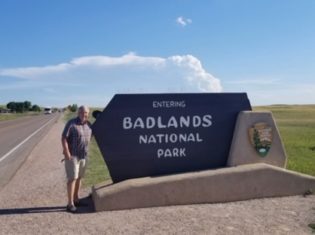 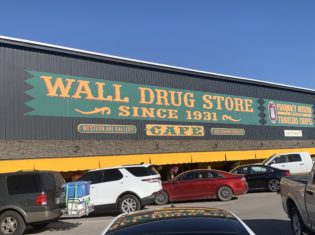 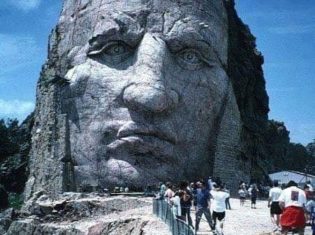 
We're sorry, this tour is now sold out.